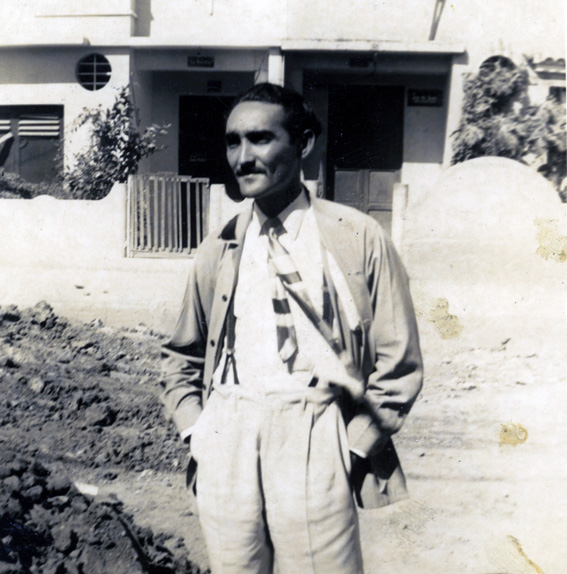 Born in Ciudad Bolivar, Venezuela, in 1923, Jesús Rafael Soto was one of the leading exponents of Kinetic art – art that moves or appears to move.

From 1947 onwards, while working as head of the Escuela de Artes Plásticas in Maracaibo, Soto heard of and began to take an interest in geometric abstraction, a concept that originated in Europe. 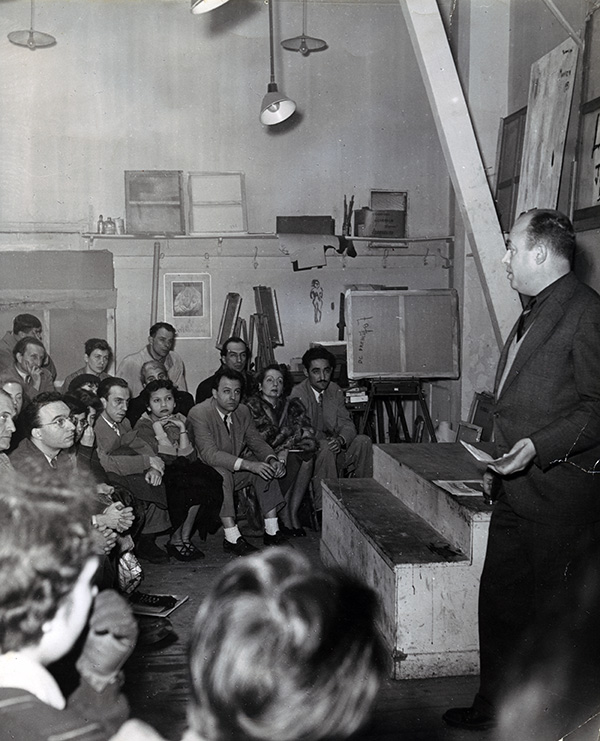 Intrigued by the works of Malevich and Mondrian, with the encouragement of a friend, the Venezuelan painter Alejandro Otero, Soto applied for and was awarded a scholarship to study in Paris.

When he arrived there in 1950, he encountered other Venezuelans, including the members of Los Disidentes, and attended Léon Degand’s lectures at the Atelier d’Art Abstrait.

Shortly after arriving, he exhibited in the Salon des Réalités Nouvelles and made the acquaintance of Iris Clert, Denise René, Vasarely, Yves Klein, Jean Tinguely, Pol Bury and Daniel Spoerri. 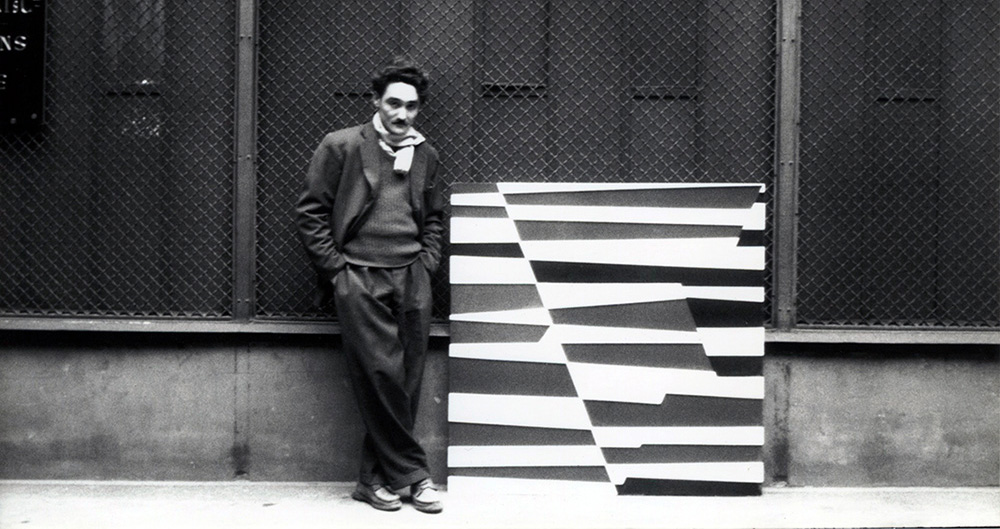 Soto with the central panel of his work “Mur optique”, 1951 © Archives Soto / All Rights Reserved

He contributed to the emergence of the Kinetic art movement,

by taking part in the 1955 exhibition Le Mouvement at Denise René’s gallery, and exhibited with the ZERO Group, who were also exploring the notion of the immaterial.

In his earliest works, Soto is already endeavouring to move beyond representation of two-dimensional geometric shapes and introducing movement by the device of repetition.

In 1953, he explored three-dimensionality by layering two layers of painted plexiglas that appeared to move when the viewer moved. 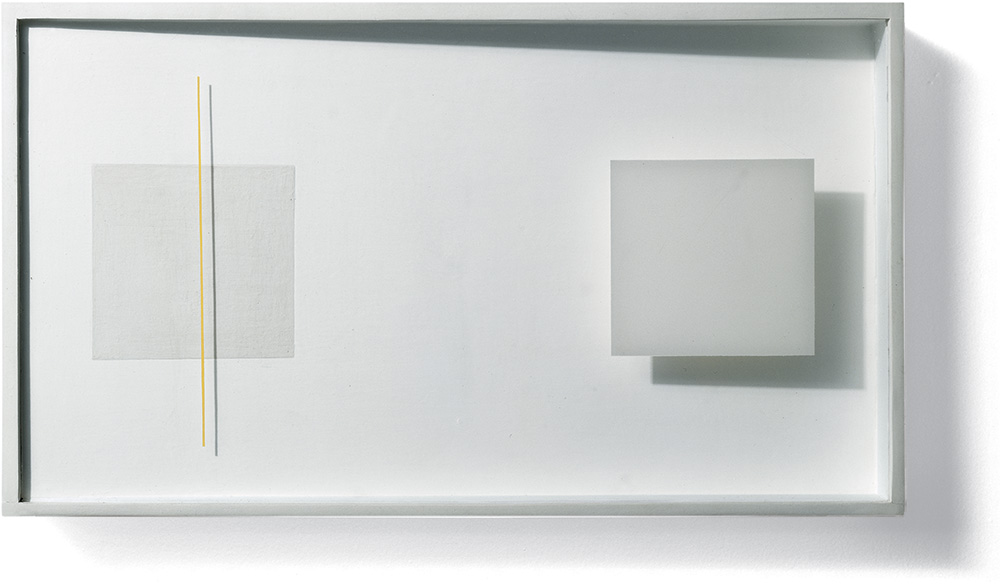 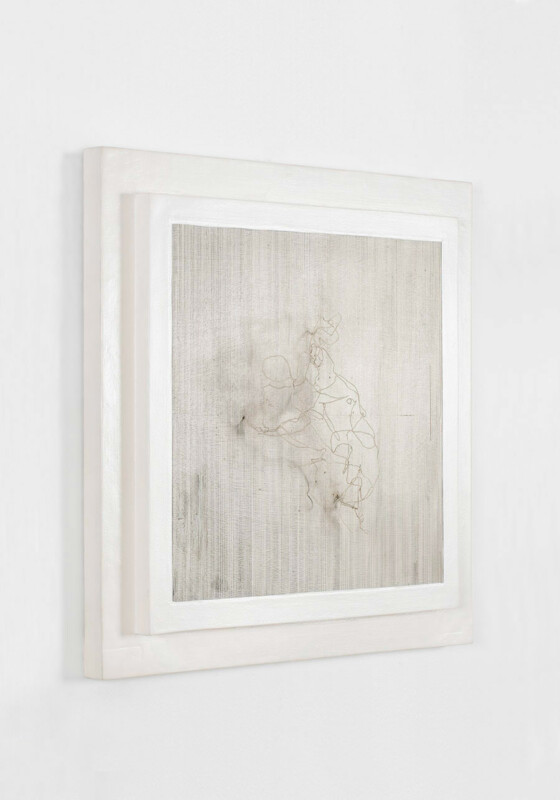 Using this device, in 1957, he produced the first of his Vibrations series –

works made by setting a tangle of metal wires or materials found in the street against a striped black and white ground to create a moiré effect.

Taking this concept to extremes & systematizing this method, Soto superimposes various elements on striped backgrounds: suspended mobile rods, metal squares or what he calls “Tes” – small T-shaped pieces of metal that appear and disappear as the viewer moves, offering a glimpse of an interstitial space that vibrates or oscillates between the visible and the invisible, the material and the immaterial. 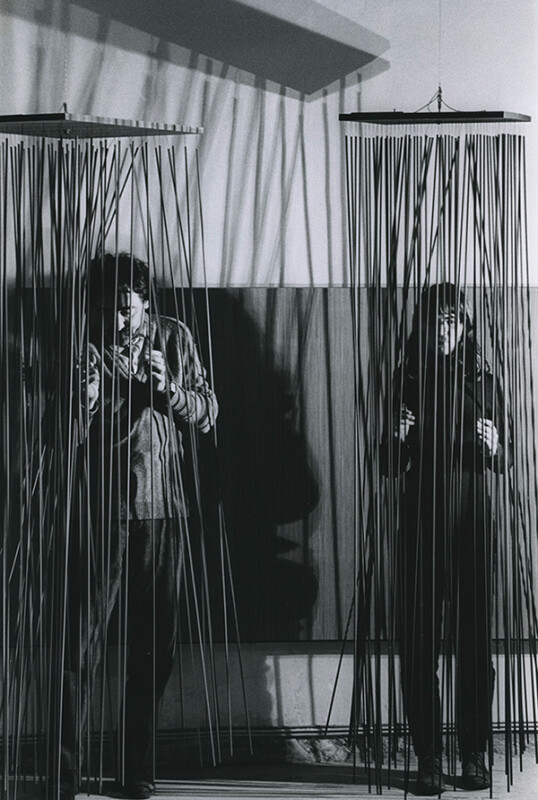 The viewer is central to Soto’s œuvre. In 1967 he produced his first Penetrables, works composed of metal rods and nylon strands hanging in space.

He invites the viewer to enter the work and walk around inside it, to apprehend the “matter-energy” of the world through “being” inside the work:

The viewer becomes an integral part of the work. Heretofore, the viewer was in the position of an external observer of reality. Today, the notion that there is mankind on one side and the world on the other has been superseded. We are not observers but constituent parts of a reality that we know to be teeming with living forces, many of them invisible. We exist in the world like fish in water: not detached from matter-energy; INSIDE, not IN FRONT OF; no longer viewers, but participants. 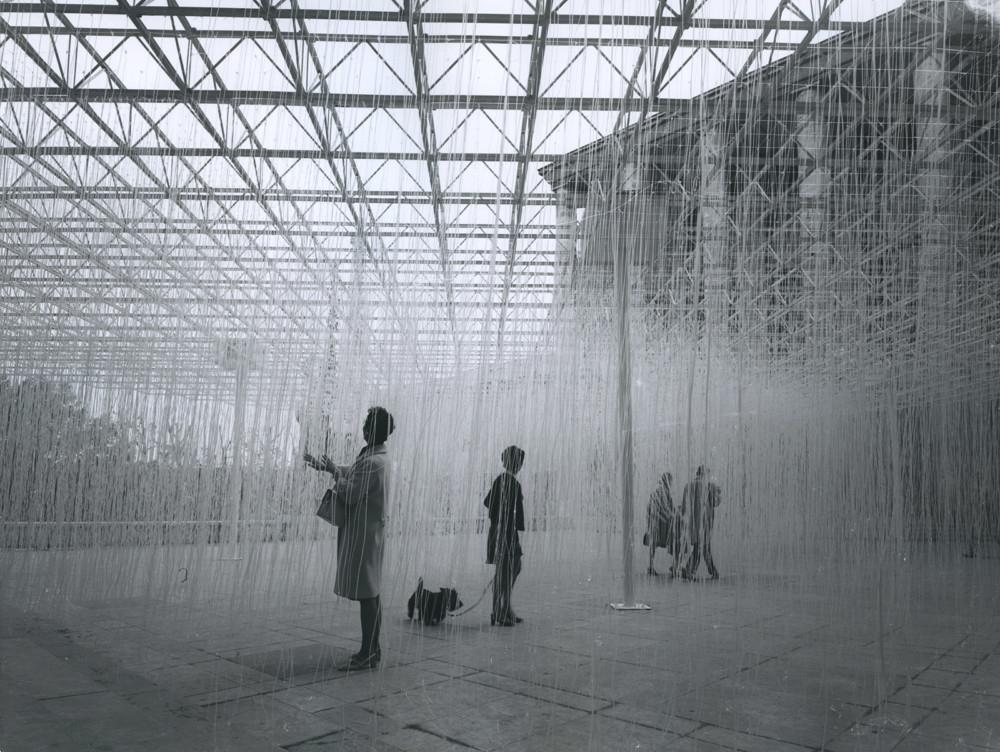 The first major solo exhibitions of Soto’s work took place in 1968, at the Kunsthalle in Berne and the Stedelijk Museum in Amsterdam.

More solo exhibitions followed at the Musée de la Ville de Paris in 1969, the Guggenheim Museum in New York in 1974, and the Museo de Arte Contemporáneo de Caracas in 1983. 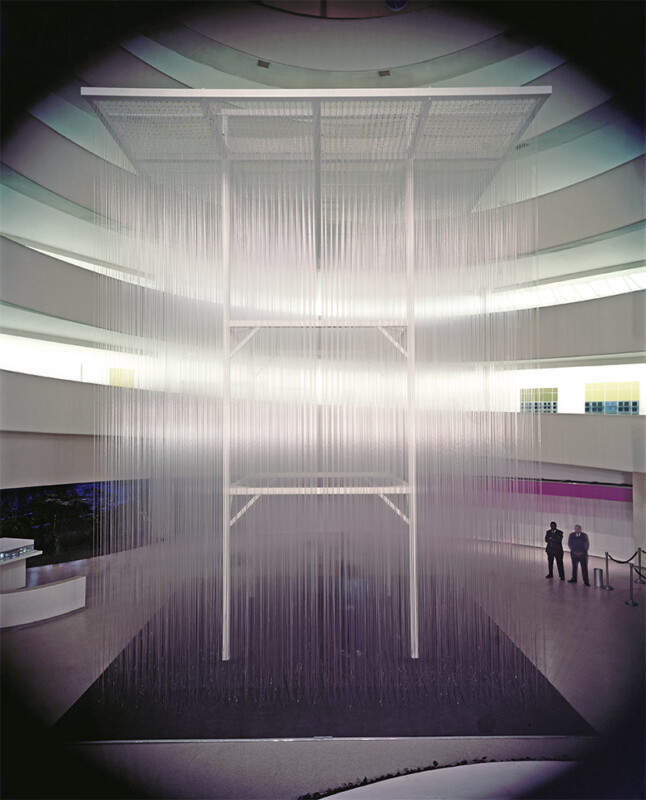 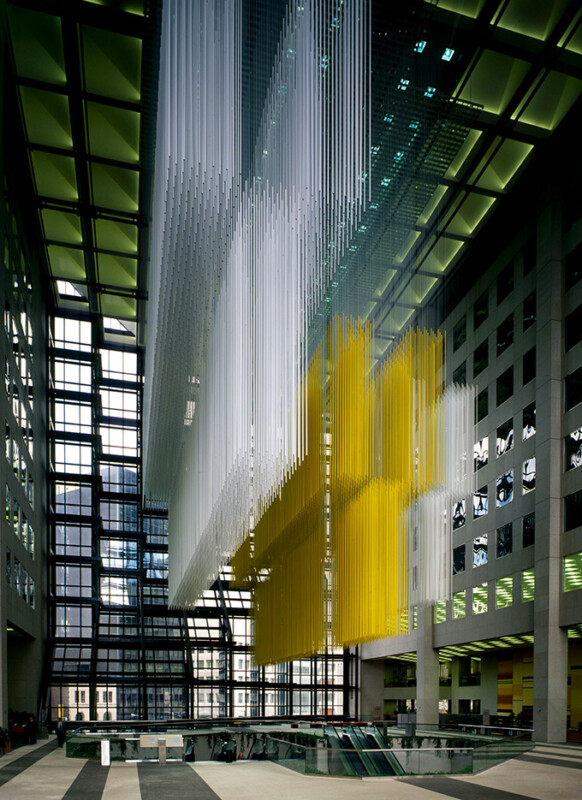 Soto was commissioned to make numerous monumental works for public spaces and buildings all over the world.

In 1973, with the aid of his architect friend Carlos Raul Villanueva, Soto built the Museo de Arte Moderno Jesús Soto in his native city of Ciudad Bolivar to house the sizeable collection of geometric and kinetic works he amassed throughout his life. The museum also contains many of Soto’s own most important works. 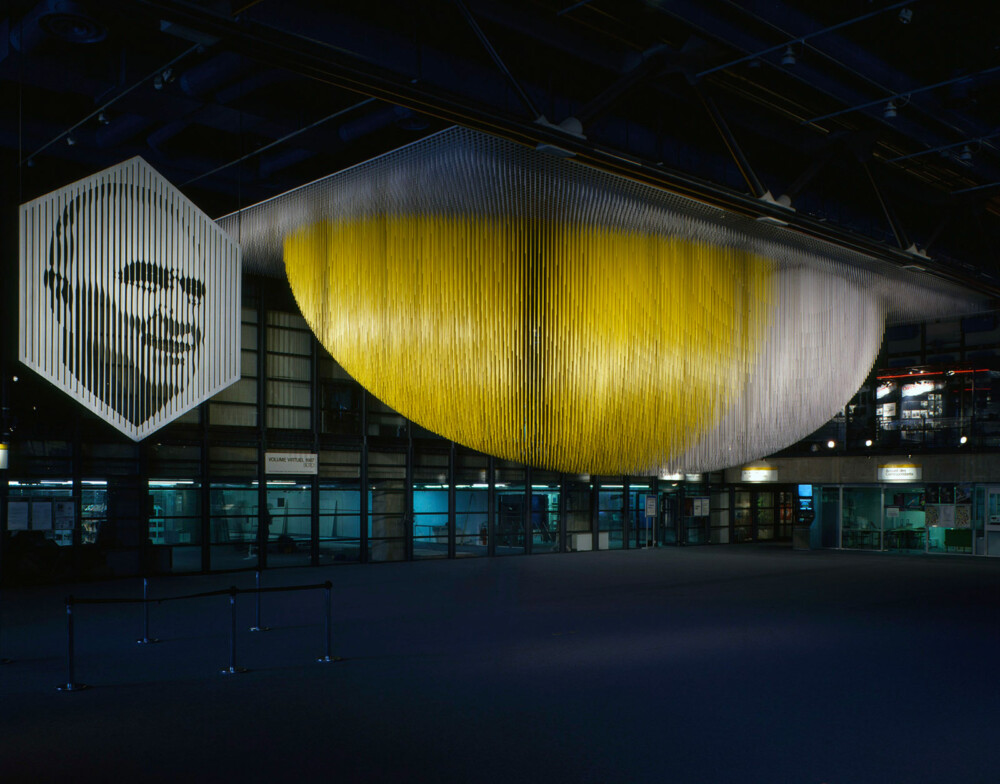 There have been many retrospectives of Soto’s work,

including one that was initially shown at the Musée du Jeu de Paume, in Paris, in 1997, and then toured for several years, another held at the Centro Cultural del Conde Duque in Madrid in 1998, and a large-scale travelling exhibition entitled Visión en movimiento that was shown at the Museo Tamayo, in Mexico, the Fundación Proa, in Argentina, and the Galleria d’Arte Moderna e Contemporanea, in Bergamo, Italy, in 2005.

In 2015 works by Soto were also exhibited at the Galerie Perrotin in Paris and New York & at the Musée Soulages in the city of Rodez in the south of France.  In 2019 his works were exhibited at the Hauser & Wirth Gallery in New York and at the Guggenheim Bilbao in Spain.

By the time Soto died in Paris in 2005, he had received numerous distinctions, including the Venezuelan National Plastic Arts Award in 1984 & the French Grand Prix National de Sculpture in 1995. 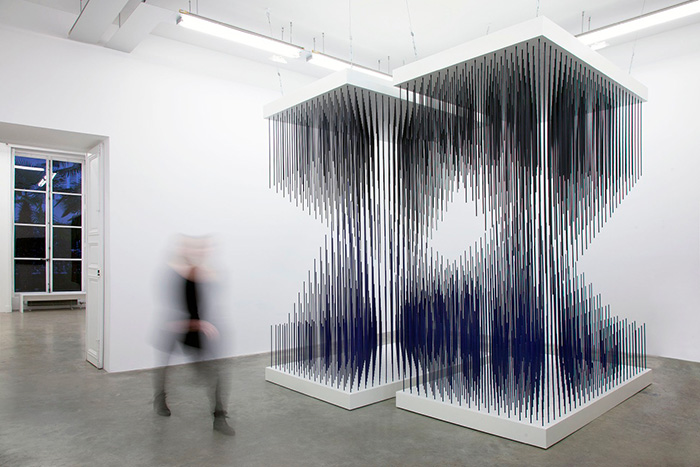 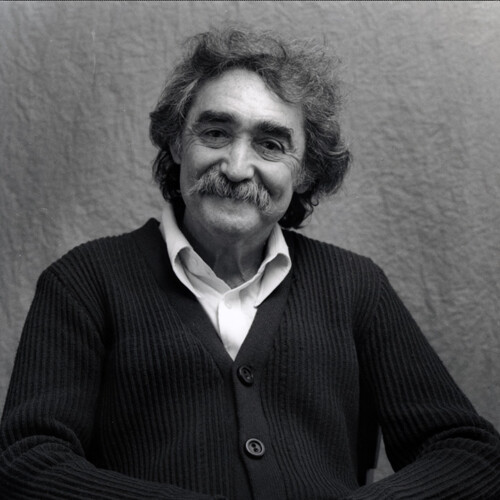 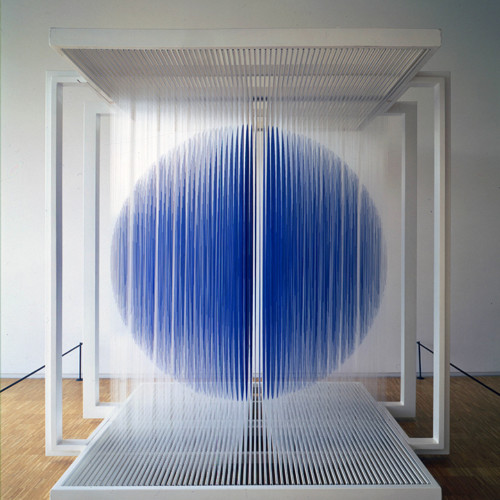 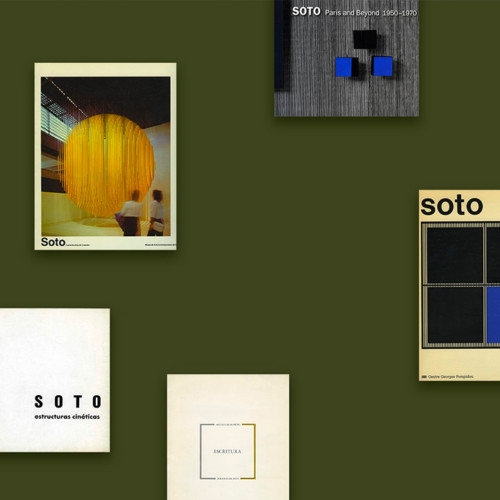